This year we welcome writer and director Josephine Halbert.

We are delighted to have a Special Screening of her film:

A Short Epic About Love.

Josephine Halbert is a London based, British artist, writer and film-maker - Her work has been exhibited at galleries and festivals internationally.

A 'happy accident' led her to making the leap from works in print to moving images when she created a short animated film ‘When It Suits Me’ (1999) to accompany a gallery show of her artwork and book of the same name. 'The short film was was meant to be a side show to my images, a presentation of a free spirited character that I have drawn since childhood and continue to do so, but that short animation piece led to adventures in filmmaking with real people. Suddenly a door flew open to a new world and I met a lot of the film making community at film festivals - I knew that my interest in my work was always based on communicating ideas with people and a love of the visual medium of storytelling and so all the years as a film lover and the days looking through movie books as a child brought up in a rural and remote Northumbrian landscape seemed to make sense 'Where I was brought up made the Bronte's place look like Las Vegas on a Saturday night but it was very beautiful and good for developing an imagination'.

Her filmography includes her independent productions (as director/producer and writer), When It Suits Me (1999), an animated short film about free spirited creatures on a mission to explore hedonistic and spiritual adventures, Shadow Buddy (2003), her first dramatic narrative starring British musician and actress Sukie Smith about a woman meeting the adult version of her childhood imaginary friend is a tribute to the director's own childhood imaginary playmate and filmed at the very location of their happy summer adventures. Time Travel Boyfriends (2009) a 35mm short ten minute film she directed based on her published book of the same name which had solo exhibitions including Beverly Knowles Fine Art and Tenderpixel galleries in London had a successful film festival run and won several awards including two Angel Film Awards in 2009 and then went on to win the PRIX RADi at the Cannes Film Festival in 2010, a distribution prize given to one international short film in partnership with the Agence de Court in Paris and the Short Film Corner. It also competed for the European Melies Award in the same year and continues to be widely exhibited. Her most recent and award winning short film, A Short Epic About Love (2013), twenty minutes long and her second adventure with 35mm film, was inspired by her life long love of the 1963 epic Cleopatra and, is the story of another love-affair that takes place on the set of the epic Hollywood blockbuster against the backdrop of the world famous Burton and Taylor romance and was shot in a disused paint factory on the River Tyne in Northumberland. It premiered at the Femmes Fantastique Programme at the 2014 London Short Film Festival and was accepted into the Official Selection at the Academy Award Qualifying Huesca Film Festival later that year which led to an international distribution deal with Magnetfilm in Berlin, which includes in its line-up of short films several of the Oscar nominated and winning films of the last two years. It recently picked up a Gold Remi award at the WorldFest Houston Festival in 2015. She has commissioned and produced the music for all her productions to date including her most recent work, completed in 2015, her first radio drama, 'Jim', a rock and roll story about a transatlantic romance between an American Rock Star and a young English aspiring writer, is set in the countercultural youth quake of the late 1960s and produced at dsound Studio in London. Her next film project as a director will be a co-production with London based production company xFilm. 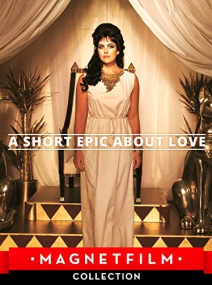 The story is a love-letter to the films of the golden era of 1960s Cine Citta Studios where Hollywood's view of Ancient Rome met the contemporary Rome of Fellini.

The other love-affair on the set of Hollywood's most expensive film of its day. Against the backdrop of the much publicized love affair of Elizabeth Taylor and Richard Burton, a young woman finds herself in the backstage world of the famous 1963 Ancient Egyptian blockbuster in a film studio near Rome. We follow her as she embarks on her own intense emotional romance over the final days of the shooting of the doomed epic. Burton and Taylor's romance remains a constant presence during her own romantic awakening in a world she knows nothing about. A Short Epic About Love is a love-letter to the films of the golden era of 1960s CineCitta Studios where Hollywood's view of Ancient Rome met the contemporary Rome of Fellini.